The Compass Rose universe -- an ancient milieu where places have no names, cities spring forth like bouquets in the desert, gods and dreams walk the scorching sands in the South, ice floats like mirror shards upon the Northern sea, islands that do not exist are found in the East, death chases a thief on the rooftops of a Western city, immortal love spans time, and directions are intertwined into one road we all travel....

You come to this place when you wonder, and sometimes, only when you dream.

Books in the Compass Rose Epos:

Dreams of the Compass Rose, a mythic arabesque "collage novel" of interconnected stories in the vein of The One Thousand and One Nights was originally published in May 2002 by Wildside Press. It garnered critical acclaim and was a 2002 Nebula Awards® Preliminary Ballot nominee for Best Novel.

After many years out of print, the 10th Anniversary Edition of this extraordinary work is available now, in handsome trade hardcover and trade paperback editions.

Also available on Amazon Kindle and various other ebook formats.

A standalone sequel titled Gods of the Compass Rose is forthcoming. The new novel in this milieu will include, as one of its "story-chapters," the 2007 Nebula Awards® Finalist in the Short Story category, "The Story of Love," and "Three Names of the Hidden God," as well as "Niola's Last Stand," appearing in Black Gate Magazine. 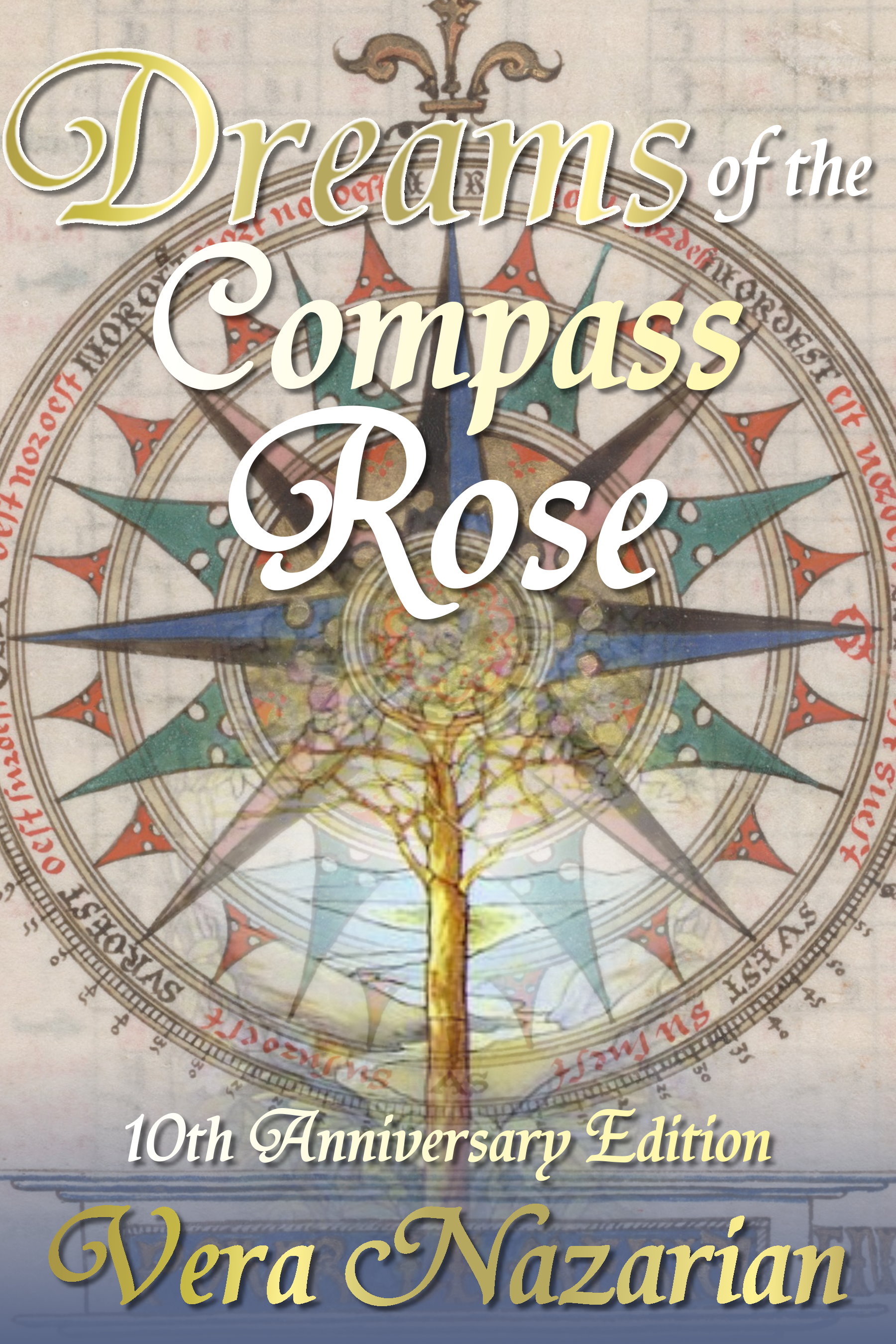 Praise for Dreams of the Compass Rose

"...a clever concoction of vignettes and short stories knitted into a morality tale about the temptation of illusion and the price of truth.... an exotic setting reminiscent of Tanith Lee's Flat Earth series.... The author's sumptuous language will resonate with Lord Dunsany and Clark Ashton Smith fans.... Nazarian's vital themes and engaging characters are sure to entertain."
— Publishers Weekly

"Nazarian's story cycle treads the borderline between the episodic novel and the short-story collection, recalling the work of contemporary fantasist Charles de Lint, early-twentieth-century fantasist Lord Dunsany, and even, reaching way back, The Thousand and One Nights....her imagery is rich, vivid, and memorable, not to mention being remarkable because she realizes it not in her native language, Russian, but in English.... Indeed, this is a singularly appealing book by a new voice in fantasy."
— Roland Green, ALA Booklist

"...unusual fantasy novel... although it uses many of the trappings of traditional heroic fantasy, the elements are assembled in a unique fashion.... Often the conflict is dark and foreboding.... Nazarian's prose is well constructed and her exotic settings are vivid and realistic. There's almost a fairy tale quality to the book, and it differs enough from the usual array of usurped thrones and quest stories to warrant your time."
— Science Fiction Chronicle

"An intricate multi-level story... a kind of Aesop's Fables... spoken with a voice from the Far East, hypnotic as the desert sands."
— Locus

"This is a novel to be read and reread in small doses as pieces of the puzzle are put together."
— The Denver Post

"Vera Nazarian is a fervent prose poet; her first novel, Dreams of the Compass Rose, is a feast of baroque colour and eloquence echoing and rivalling Lee's remarkable arabesque cycle, the five-volume Tales of the Flat Earth.... Dreams may well become a landmark in the architectonics of the fantastic.... a fierce and stylish statement of innovative purpose in a genre that needs shaking up. Fortunately, with Vera Nazarian joining the reforming crusade of such fantasists as China Miéville, Jeff VanderMeer, Kelly Link, and Jeffrey Ford, an earthquake seems imminent..."
— Nicholas Gevers, Infinity Plus

"Vera Nazarian is faithful, in her own way, to the storyteller tradition. Her stories have the same sense of mysteries being revealed, and often producing more mysteries, that myth and folk tales do. Her prose tends toward the peculiar combination of exotic and generic detailing found in fairy tales. She keeps her vocabulary and her setting pre-industrial. Her world is filled with timeless lands, endless deserts, unfathomable abysses. Slaves, kings, nomads, warlords, mages, sea captains, and gods all tangle in quests of conquest and journeys of discovery."
— Eugene Reynolds, The New York Review of Science Fiction

"...a sweeping, lyrical style that nevertheless contains touches of earthiness.... It may well be that Vera Nazarian, like her trickster goddess, Ris, is one of the old masters of fantasy, returned to earth in a new guise. She bears watching."
— A. L. Sirois, Deep Outside SFFH

"Vera Nazarian has captured a rare and special kind of beauty.... Each story is a gem in itself, a self-contained modern myth with a certain unique flavor. It's as though the lands of the Thousand and One Nights had collided with the worlds of L. Frank Baum, producing a story cycle with an Ozian undertone and an Arabian accent. Take one story at a time, and savor the rich language, the images, and the archetypical characters which populate it. Read them all, and trace the patterns of man vs god, truth vs illusion, reality vs legend, appearing over and over in different guises."
— Michael M. Jones, The Green Man Review

"It can be said that all stories are dreams, through some are more real than others. It is the measure of a writer to take a tale of wonder and make it honest, with the marvel of fantasy and the keenness of actuality. So Vera Nazarian does in her astonishing work Dreams Of The Compass Rose. This master storyteller takes us to a world of beauty and harshness, love and cruelty, covering all from light to dark."
— Colleen Cahil, SFRevu.com

"If you took the entire oeuvre of Tanith Lee, melted it down, and shot it up, you'd have the experience of this book."
— Allison Lonsdale

From the book jacket:

"The colorful strong writing style that Vera has worked on for years has come to full fruition."
— Marion Zimmer Bradley

"Dreams of the Compass Rose is a rich, exotic blend of high romance and high magic of a kind rarely seen since the classic fantasies of Lord Dunsany, James Branch Cabell and Clark Ashton Smith. This is a work not to be gulped but savored, but if you do find yourself unable to stop, re-read it slowly enough to taste the truth within the poetry."
— Diana L. Paxson, author of Hallowed Isle

"I love this book. Dreams of the Compass Rose is a story-cycle in which we keep coming back to the same characters, except from different viewpoints and different times in their lives. It's set in a land of desert empires that never was, though it could easily be our world -- far in the future, or deep in the past. Some of the stories are brutal, some are like dreams. All of them are engaging and resonant, creating a new mythology that feels so right one might be forgiven for thinking that it's the cultural heritage of some forgotten country or people that have been lost to history. It reminded me of those wonderful, dream-laden story-cycles that Clark Ashton Smith and Lord Dunsany were writing around the turn of the last century. Dreams of the Compass Rose has a similar stately lyricism, a compelling and visionary voice that speaks to the heart of the reader."
— Charles de Lint

"Vera Nazarian's Compass Rose leads the reader on a lyrical journey through time and space, while her compelling and kaleidoscopic tale of multiple lives intersecting about a common point explores some of human nature's most basic truths."
— Jane S. Fancher, Author of Dance of the Rings

"With a glorious richness of language and a use of visual imagery that makes each page like a fireworks display, Nazarian has produced a novel that might seem at first glance to be straightforward generic fantasy. But it's not. It's far, far more rewarding than that. What she does in Dreams of the Compass Rose is use both old threads and new to weave fresh myths -- and vigorous myths at that: there is something almost primal in their power. It is rare these days to find a high fantasy that is more than a rehashing of tired themes. Dreams of the Compass Rose is one of those rarities -- and a rarity to be treasured. This book breathes the true stuff of fantasy."
— John Grant, Co-Editor of The Encyclopedia of Fantasy